Did you watched the video?

During my first time of watching this video I found it funny,hilarious! but gradually as I watched it again, I come to realized that this video wasn't really that funny. Rex Navarrete (the speaker) was trying to make fun of the Filipinos' pronunciation of English words. He was trying to portray an old man, owner of SBC Packers like it was in his story. He was intentionally trying to deliver his speech with Malice motives in order for his foreign audience to laugh! Pronouncing "packer as fucker" in front of foreigners for example. Mr.Navarrete is also making Filipinos a pathetic ones, trying to show to people that we are ignorant? i can't believe it!

This is also one of the reason why I can't blame foreigners with their perceptions to Filipino people like Filipinos are in the lower class or like Filipinos can not do better things than foreigners, because they can witness a Filipino himself insulting his own country.

In Psychology, Perception is a process by which individuals organize and interpret their sensory impressions in order to give meaning to their environment.Sometimes, individuals may look at the same thing, yet perceived it differently. For example "I love hongkong style noodle because for me it tastes delicious, however Kenneth my classmate doesn't like it because for him it doesn't tastes good. kenneth and I like the same thing (Eating), But we interpret foods differently. One of the reason is that we hold different standards toward food (he likes salty-sweet foods while I like soury-sweet foods).Kenneth doesn't like sour thats why he ended up disliking it (the noodle,tasted sour).

Two adolescents deal with one of the hardest things in high school: being gay. The couple's strength is tested when their sexuality is exposed to the entire school. One of them is willing to come out, the other wants to deny everything and keep it a secret. The very validity of their relationship hangs in the balance...Â

There are some adolescents who find difficulties in terms of their sexual preference(being gay). Most of them are afraid to what will people say, most of them are trying to camouflage to avoid judgemental.

Two years ago during high school I remember, I was one of those guys having dilemma with sexual orientation. I hate it when people are labeling me "gay". So every time when there was a chance I was always saying "Ang gwapo ko no?" or when there was a lady passing by, I would say to someone beside me "shit ang ganda n'ya!" or worse "nakakagigil!". I experienced to court a girl even I didn't like it. What is funny in my story is that, I can't resist myself much from staring guys especially when they are cute and sexy but of course I don't want to mess up with my credibility. Haha! So, i used to stop myself from staring before they notice. Hehe! "Pasimple!" 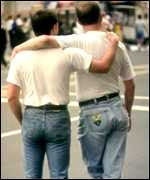 However, I didn't close my option. I experienced to have a same sex relationship, what was big deal about it is that we had to kept it secret, of course. But me and my partner's agony started when my friends and classmates knew about it.

In relation to Psychology, according to my friend Homosexuality is merely a feeling , a feeling when you fight back can manifest as maladjustment. But i don't know if I'm going to believe it or what.

Furthermore, according to my professor homosexuals mostly are creative, skillful and intelligent, because homosexuals have more Corpus Callosum that connects the two hemisphere of the brain.

I believe homosexuality can start as early as three years old. In frued's theory of personality development, during Latency stage (ages 7-11) children prefer social activities with same sex but not in this case, a gay child prefers to play dolls and kitchen toys with their neighbor's daughter. At Genital stage (ages 11+) the faggot child can feel lust and affection but not to establish intimate relationships.

I infer Anima (Female side of male) dominates the personality of a homosexual. Some homosexuals are Introvert( concerned with themselves, hesitant, quiet cautious and generally they inhibit or hold back expressions of their impulses and feelings), they are so-called "discreet". Some are Extrovert( open confident, like a high levels of stimulation, talkative, sociable, give free expressions of their impulses and feelings).

Moreover, Homosexuals are fully functioning people, they enjoy life to the fullest. They are also self actualizing people, they reach their fullest potential and accept their selves for what they are. Unfortunately, they have to deny their personality and repress to avoid insults and frustrations.

And that is why i like the video! oh! readers, you can see on the Psychology book by Marilou C. Asturias, Henry M. Agong and Allan T. Mosura all the terminologies I used here on my blog!

"To treat your facts with imagination is one thing, to imagine your facts is another".
-John Burroughs

Is my blog significant?